From My Cold, Undead Hand

“Marie Marshall takes the vampire genre to a completely new and unique dimension!” 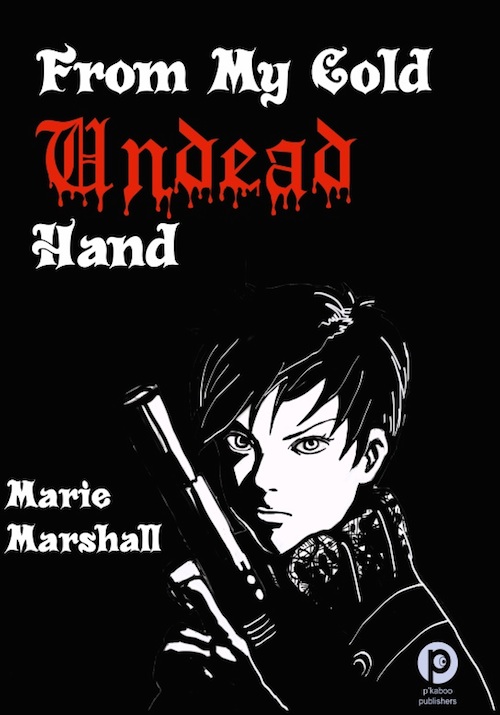 Look into the eyes of Chevonne Kusnetsov, single-minded, cold-blooded, teenage destroyer of vampires in a New York City of the near future. Chevonne is on a mission to break the horrible deathgrip that vampirekind has on humankind. But is she as in-control of things as she believes, or is she swept along by forces she does not understand? Find out in this fast-paced first novel in a planned series of adventures aimed at the teen/young-adult readership but equally appealing to vampire-genre readers of all ages!

“… the novels launches straight into action… Spiced here and there with hints of ITpunk and steampunk, and complete with a nineteenth-century sub-plot revealed in an old book, the pace of the novel never flags. It shuts with a bang – readers will blink and say “Huh?” – leaving a perfect springboard for the sequel, KWIREBOY vs VAMPIRE, which is already being written… This is a book to watch out for, one not to miss…”

“… well-written, fast-moving, and you’d better keep up with the tango…”

“… this is INSANELY good. It is not only the kind of thing I would read, it is the level of work I would HIGHLY recommend to friends in the ‘neck-bitey’ fandoms. I never expect less than great from Marie Marshall. This is the kind of work that shows up the flaws in, say, ********* *****’s work all day long…”

“… Better hold on, crawl in under the blankets and put the Kindle light on.  Don’t read it while you’re alone…”

“… Marshall’s story is a great adventure book that will keep you reading and wanting to know more. She has created a world set slightly in the future, which has followed a realistic curve of where we are today, just with a few fantasy elements added in that change everything and make a dystopian society. Within this world our heroine, Chevonne, has plenty of fierce attitude and intelligence to offer a ray of hope, providing an interesting role model for young female readers…”

“… From My Cold Undead Hand (Where the Vampires Are, Volume 1) by Marie Marshall is the first book in what promises to be a thrilling, interesting take on vampire legend and lore. Chevonne Kusnetsov is a teenager living in the near-distant future, a world that you will recognize but it is subtly different from our own. Chevonne is like any other normal teenager – she goes to school, has friends, has a mother who worries about her, stays home alone after school reading books, but her ‘job’ is not the job of normal teenagers – she researches and kills vampires. This isn’t a Buffy the Vampire Slayer world, where the vampires are all beautiful, but our world where the vampires just want you dead. Chevonne is a Resistance fighter, and she’s out to save mankind.

Marshall does a fantastic job with creating an alternate world for us, where the action happens at a breakneck pace. From using technology that isn’t developed yet, to using weapons not designed yet, to using language and phrases not spoken yet, she creates a universe that is strangely familiar to us, yet it’s a place where you have to watch your back or you’ll be dead. Vampires aren’t glamorous, it isn’t romantic to meet a vampire in the alley behind the school, and they most certainly don’t sparkle. Marshall also does a remarkable job of tying in the classic vampire novel, Dracula, but makes you believe that it’s all real. This is a book that will leave you breathless for more!“

“… What makes the book interesting, the deeper you get into it, are the unexpected twists to the plot, and the build-up to the climax. I was totally taken by surprise. From a book that starts with a Buffy-type clone, kicking and killing vampires in high school, the story takes a totally different turn…”

“… I didn’t expect Undead Hand to be a straight-up action-adventure young adult novel, but “straight-up” is the wrong phrase. Undead Hand takes the all-too conventional narrative motif of the hero’s journey and tells it in a non-standard way, shifting the usual focus by the end. The elements are familiar to start out with: Chevonne is a teenage vampire-slayer, she has an old mentor whom she aptly nicknames “Stoker”, there’s a vampire overlord opposing her; but the story beats are skewed, off-kilter, and continually goes back to a practical concern: What would all this crazy stuff going on actually do to somebody that young?“

“… Marie Marshall takes the vampire genre to a completely new and unique dimension!“

“… a fun, quick read with a definite pulp aesthetic, a well-thought-out setting, and a willingness to question its own genre assumptions. The last is still pretty rare in this field, and I’d like to see more authors take that approach.“