‘Naked in The Sea’

A collection of sixty poems 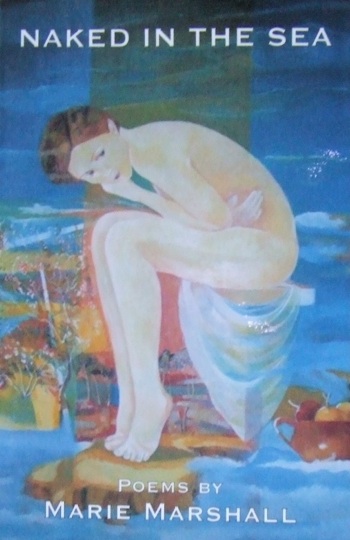 ‘Naked in the Sea’ was originally published by Masque Publishing but is unavailable from them at present.

This wonderful volume is divided thematically into five sections, and one of those sections, entitled “THE BIG EASY: Eight poems inspired by N’awlins,” contains sonnets that have the bygone-era charm and tenderness that made [Sara] Teasdale’s poetry so inspiring, but also contemporary subject matter relatable to a current audience. And who can resist the setting? The sounds and tastes and smells of New Orleans float off the page and fill the reader’s subconscious until these poems feel three-dimensional. [Hear ‘Plain Jane $3.99’ recorded by a N’awlinian in N’awlins here.]

But that’s just one section of a book which begins with the compelling line “The moon sometimes shines to the bone.”

There’s a certain reverence of sensuality here, each vignette a lush morsel of verse which, like a chocolate truffle, leaves the reader wanting yet one more before putting the book down.

One of the nice things about reading a book of poetry is that it’s frequently easy to read just one or two poems at a time. There’s no hurry to get to the next chapter; poetry can be savored. The pacing of Naked in the Sea, at times reminiscent of the Beats yet utterly unpretentious, makes it hard not to turn the page and read another, and another and another.

Another section highlights the theme of nakedness, the self laid metaphorically bare through love, grief, commiseration, desire. It plays with language in the way Seamus Heaney’s masterful translation of Beowulf does. A line in his epic contains “hasped and hooped and hirpling.” Marshall uses this same kind of inner whimsy to bolster more serious or passionate subject matter.

The sea tells truth, and it was glad
to feel your nakedness against it;
your skin, where I touched it
with my lips, had the sea-salt taste,
and your breasts were true with it,
with the truth of it, yes with that all-truth,
yes with that rolling true-cross of sea-nails,
the spear of salt in the wind.

In some poems, she makes narrative poetry out of deft metaphors, keeping a light enough touch that the story doesn’t cloud or overbear the lyric. She also plays with style, employing with particular skill the dramatic monologue form in some of the “leaf” and “hunger” poems.

Marshall has a particular facility with brevity. Naked in the Sea contains many short poems like tidbits that can be enjoyed when you have a moment, and then the back of your mind can chew on what you’ve read, meditate on it in the quiet moments of the day or in the crevices of night.

At times the vignettes in this collection feel like discovered fragments of ancient poems. They evoke a feeling, a character, a conflict. They give us a moment of sublime imagery and scene, and then they leave us, teasingly…

… Books like Marie Marshall’s Naked in the Sea show me that people out there right now are playing with language and theme and form and keeping poetry very much alive.

A great book to read just before you sleep. Like all great poetry, some of it really resonated with me, while other poems I found a little baffling, although I think they will ripen with me on re-reading. Something to look forward to, and a book to treasure.
Highly recommended.

Marie Marshall’s Naked in the Sea leaves me naked, body, mind and soul.  Listen!  Listen as she plays ‘Greensleeves’ on our heartstrings, leafing through the runic manuscript of the soul.  As Marie herself recently wrote, “To describe is to destroy. Décrire, c’est détruire.”   Marie never meanly describes; she sublimely pens soul to soul.  In her own striking rhythms we may find traces of  those of Gerard Manley-Hopkins. And that is not all. Like Gerard Manley-Hopkins before her, she often resorts to mystifying hyphenated turns of phrase. In Hopkins we find such constructs as “wind-wandering weed-winding bank”  (Binsey Poplars) and “skies of couple-colour” (Pied Beauty). Likewise, in “Naked in the Sea” [the title poem of the collection] we find, “true-cross of sea-nails”, and “later, later still, star-late…”  strikingly reminiscent of Hopkins. On the surface perhaps; in the depths, far from it. Marie Marshall’s elocution is far afield from Hopkins’. Given the remarkable sensibility of her poetry, I find myself all but speechless at the sweeping genius that so often informs Naked in the Sea.

This being said, I defy any critic to do justice to her luminous creativity, the soul of her heart’s aspirations and desires so eloquently transformed into poetry, in the truest sense of the word.   If asked to assign her a place along with the finest poets of the twentieth century, I find that I must rank her with the likes of William Butler Yeats and Edna Saint-Vincent Millay, however much her style and disposition as a poet diverge from theirs, as indeed it does. Marie Marshall shines as a beacon amongst early twenty-first century poets, all too many of whom are mediocre wordsmiths, merely regurgitating the rigidity that characterised so much of the poetry of the twentieth century, a century in which the vast preponderance of poetry seemed sadly oblivious of the halcyon heights of the best of English poetry of the past.

Marie Marshall’s poetry is irradiated with the very soul and spirit of rhythm, assonance, alliteration and rhyme that is the hallmark of the most prized of English poetry, past or present.  We are somehow aware that she, among a few select contemporary poets, has re-entered the Elysium of historic English poetry, with unique qualities which speak, not for the past, but for the emotional and spiritual needs and aspirations of poetry readers today, in our world of the early third millennium, and on such a scale that she shall, I am sure, endure.

“Marie Marshall is a poet of substance. Relatively speaking, I would place her at the level of the late Sylvia Plath. I am an Australian poet/editor and for years, I’ve had the greatest respect for the depth of talent in poems by Marie. Do read her work again and again.”

“… her poetry is poignant and of a rare beauty.”

Let the last leaf to leave sweep the tree clean,
her dreams, her thumbnail-bible seeds, all
clean away; and lay her blaming ghosts,
flame-filled, candle-guttering, fluttering blades,
broad spears and swords of summer parlayed.
Those maiden-memories of twig-tip talk,
leaf-lip to leaf-lip in the language of green,
let them all go, black hands against the blue
if the sky is still kind, caught in the rush of gold.
Let the tree be stark, silent in the thunder-shock,
shorn and hollow-souled and, of-a-sudden, old;
no more whispers, no tree-to-tree gossip,
only a sigh, and not the sigh-in-music
that is the in-breath of love, but the long,
sharp, fading sigh of pain, the sightless sigh.
Let her be naked and alone, thought-free,
while the leaf-rush goes skying, or hangs
on the hawthorn-hooks of rough hedges,
scattering rooks from the mourning branches,
in the cruel, spare scything of a new wind.
Let the tree die, let her sleep, sleep, sleep,
and let the last leaf to leave
sweep the tree clean.