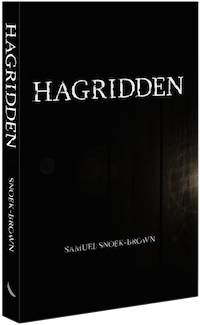 Samuel Snoek-Brown will possibly turn out to be one of the best storytellers of the 21c. There’s a modernist feel to his storytelling, very often his plots don’t resolve, but rather give the sense that a process – a life – is going on, and that we have witnessed a part of a greater whole. The psychology of his characters is seldom explained but always clearly displayed, as readers have already seen in Boxcutters, his slim book of short stories. Now we have his first published novel, Hagridden, to consider. According to Sam, Hagridden isn’t the first novel he has ever written, owning up to other attempts when he was much younger, saying “they were books I had to write in order to learn how to write this one”. Teethcutters, you might say!

Hagridden is the story of two women who eke out an existence in the Louisiana bayous towards the end of the American Civil War. One way they survive is to murder fleeing soldiers of both sides and sell their weapons and accoutrements to a corrupt storekeeper. When a neighbour, a comrade of the younger woman’s dead husband, returns to his hut having deserted from the Confederate army, their existence is thrown out of kilter. Aficionados of Japanese film will instantly recognise that Hagridden owes a huge debt to Kaneto Shindo’s movie Onibaba (1964). This debt has never been a secret, although it is not directly acknowledged in the book. However, this is not the first time that a tale from medieval Japan has been transferred to 19c America, and it is not simply an adaptation of Onibaba; not only has the tale moved in time and location, but it has also switched media. There are also differences in the plot beyond that, some subtle, some very obvious.

The Civil War is a very powerful element of the USA’s national myth as well as of that nation’s actual history. The stiffness of 1860s daguerreotypes from which uniformed, bearded men stare out was taken forward into film and TV – Gone with the Wind, North and South, Gettysburg – with gallant officers, plantation ladies, and stoical slaves. Largely forgotten in popular culture is the devastation to lives on the periphery. That is where Sam Snoek-Brown sets Hagridden. The two women have been brutalised by poverty, and their consequent violence is graphically described. Sam doesn’t pull any bayonet-thrusts in his descriptions, he doesn’t let the reader look away at any time, forcing a confrontation in which not every reader will feel comfortable. There were times as I read when I wanted to beg for mercy, not for myself and my own sensibilities, but for a character. In the end, it was almost a surprise to learn who did and who did not survive. Mercy, however, isn’t an option, as the book is driven along by the worst in humanity, in nature, and in superstition. There is only one act of kindness in the book, and that seems to be nothing more than a device to allow two of the central characters to survive a little longer.

Hagridden is almost an amoral book. In fact I would guess that this is deliberately so, making its amorality a moral stance in its own right. Characters are allowed their own morality, as when one of the women rationalises the sins of murder and lust:

I ain’t talking about killing nothing. They’s bad and then they’s bad. What we do we do to survive and they ain’t no sin in that. But lust? Whoo girl, you got to look out for that they lust. Worst sin they is. Sinners what lusted after the flesh in this world, they turn to animals in the next. Crawl round on all fours like dogs and the brimstone burning off they knees, the skin off they palms. Some say rougarous is lusters coughed up from Hell to walk the earth.

A ‘rougarou’ (Fr. loup garou, werewolf) is what gives Hagridden its superstitious, supernatural element, although there is a mundane explanation to this creature’s appearance in the story. However the appearance of the second (or is it third?) rougarou is almost too convenient, almost that of a deus ex machina, and not the novel’s most convincing episode.

From the quoted passage above, it can be seen that much of the dialogue is written with a distinct ‘eye-dialect’. There are also what I call ‘fixers’ – usages which establish a time and place in a story. In the case of Hagridden, the fixers are Cajun-isms, notably the way characters address each other casually as ‘sha’ (chère), ‘vieux’, ‘petites’, and ‘boo’ (beau). They don’t always work, as when ‘boo’, normally said to a man, is addressed to the older woman (p.14), or when the ungrammatical ‘ma petit fils’ is used(p.158). Such solecisms may exist in the vernacular of Louisiana – I speak a little Louisiana French but am no expert – yet they look wrong on the page. As a general point of style, direct speech is not marked by any form of quotation marks. This meant that I had to look consciously for where speech started and ended. But this wasn’t a chore, and in fact it concentrated my attention, making the text as a whole feel very taut. Some readers might find the use of the word ‘nigger’ unpalatable, but if it was there in the actual speech of that time and place then it has to be there in this novel.

Human-on-human is not the only brutality of the novel. Greater than the violence and murder done by the characters on each other, and than the supernatural terror of the werewolf stalking the bayou, is the force of nature. A hurricane and tidal surge threatens to wash away everyone and everything, including the story (pp.193-200). One of the most compelling passages of the book comes here, as two characters watch an oddly-juxtaposed procession of domestic objects, animals, and people float by them in the flood. It is surreal, almost nightmarish.

Sam Snoek-Brown has been praised for his meticulous research while writing this novel. Although I have queried some details, I could see as I read that he had indeed paid a great deal of attention to historical authenticity. This was obviously something he wanted to achieve, an integral part of the exercise of writing the novel. I don’t want to belittle that achievement, but to me it wasn’t over-ridingly important. What was more important was the novel’s plausibility, its power to make me suspend disbelief and follow the story to the end. He achieved that with an expertise that made it seem easy. That’s the mark of a craftsman-author. This novel may be read ignoring my quibbles, and on that basis I recommend it fully.