What will emerge from the fire of inactivity?

I seem to recall, from James A Michener’s Centennial, that twentieth century ranchers with sizeable flocks of sheep deliberately kept a few head of cattle, so that they could legitimately call themselves ‘cattlemen’, in order to benefit from the cachet of that name. Well, I’m an author. The fact that I also cook, clean, and have a paid job – all of which takes up most of my waking day – is neither here nor there. This means that in order to keep the content of this web site fresh, however, I have to manufacture news on a slow news day.

So, what is actually happening in my non-quotidian world? Am I currently authoring? ‘Yes and no’ is the answer to that. My second novel, The Everywhen Angels, is currently with three publishers, two of which actively expressed interest in having the manuscript; I have recently tweaked the content slightly, to reflect how the world has moved on in the handful of years since I completed it. I have plot outlines and chapters-in-progress of two other novels, neither of which has progressed for some time, I have to admit. There are many genuine reasons. However, the more these reasons accumulate the more they seem like a list of excuses – the household chores, the paid work, the fact that for much of 2012 I was working on a new collection of poetry (I am not a fish) for a publisher, the promotion of that published collection and of my first novel Lupa, the editorial work on The Phoenix Rising from the Ashes, the quarterly editorial work on the zen space…

Something had to give, and it has been work on my next novel(s). So what else of note is there? Well, since 2011 I have not been submitting much in the way of poetry to magazines. The exception being that recently I dropped a handful of haiku to Bones Journal and to Blithe Spirit (the poetry magazine of the British Haiku Society) and had one accepted at each, bringing my total of poems published since 2005 to two hundred and thirty-two. I need hardly add that this does not include poems blogged etc., which would take the number into the thousands. Nor does it include an extempore poem recently tweeted to the Scottish Poetry Library, which they instantly re-tweeted to all their followers. Nor, for that matter, does it include the poems that were published but which I’ve forgotten.* 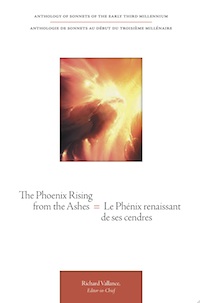 Work on The Phoenix Rising from the Ashes has reached galley proof stage. I shall be engaged in that over this weekend. Publication is late, but the anthology should be out in July. I am looking forward to that greatly, as is the whole of the editorial team. With all the work mentioned above going on, I rather foolishly proposed to five fellow-poets a small chapbook anthology – I’ll do it, I’ll do it, I promise! Thankfully the next issue of the zen space has a guest editor…

All this makes me realise that what I do not have, and should have, is a schedule detailing what I have to do. It should list tasks as ‘urgent’, ‘important’, and ‘routine’; attention to serious writing should never drop into the ‘routine’ category, even if it is to be tackled routinely, if you see what I mean.

It is 8:15 on Saturday morning. I have been up since 4:15 and have spent most of that time here at the keyboard. Have I written much? No, I’m ashamed to say that I haven’t, but I will admit that it’s a wonderful time of day for it. I really must put ‘making a schedule’ on the list of urgent tasks for today.

2 Comments to “What will emerge from the fire of inactivity?”