Marking a century of haiku

As an anthologist I know when something ought to be done, and this had to be done. The centenary of Ezra Pound’s

The apparition of these faces in the crowd;
Petals on a wet, black bough.

in the infancy of imagism was impossible to miss. This book does not commemorate a birthday, however – it’s not just for this year, 2013. It stands as a record, and ought to stand as a book of reference.

The last time I reviewed a collection of haiku I made plain my objection to much time and energy being spent on writing about this word-form. I haven’t changed my opinion, but I will say that an editors’ foreword can’t be escaped in a book of this length. There simply has to be an explanation of what the editors had been trying to do. Their exercise was one of importance, marking a numerical milestone in the writing of haiku in English, their stated purpose not necessarily to present to us the ‘best’ haiku in our own language (stating that could be seen as cannily preempting criticism of their selection) but perhaps haiku which illustrated best its stages of development over the past hundred years.

That is what we are supposed to spot as we read. The stages are not flagged-up for us. Thus when I read, say, Ezra Pound’s orientalist

The petals fall in the fountain,
the orange-coloured rose-leaves,
Their ochre clings to the stone.

and the final poem of the book, Rebecca Lilly’s

Snow at dawn…
dead singers in their prime
on the radio

I am supposed to see a word-form which has changed, developed, moved. As it turns out, with these two examples I don’t. I see what I will have expected to see throughout the book – a continuum. Every newcomer to haiku has certain ‘rules’ drummed into him/her, notably the syllable-count, the reference to nature or season, the cutting point at the end of the second line, the need to omit definite and indefinite articles, and so on. That last ‘rule’, by the way, is one of the silliest and most stultifying, and one which (I am glad to say) most good writers of haiku ignore totally. Each of the poems above use an observation of nature to point to a season, each expresses the transient moment, neither dispenses with articles and therefore each flows naturally. This is precisely what I mean by ‘continuum’; I believe that the first and last poets to appear in this collection would have understood precisely what each other was trying to do.

By the way, neither poem adheres to a strict syllable count. Billy Collins in his guest introduction to the anthology makes the point that ‘a “syllable” does not have the same meaning or weight in Japanese as it does in English’. True, but the next time I read this I swear I’ll scream. It is the prime example of a ‘non-rule’ to counter balance all the ‘rules’.

Back on track. Would I be right to conclude that if I pick someone from the middle of the period, I will find the same recognizable ‘continuum’? Here are two from Jack Kerouac:

Yes. No. maybe. They’re brilliant anyway. But then someone else jumps in and kicks me in the head. Larry Gates: 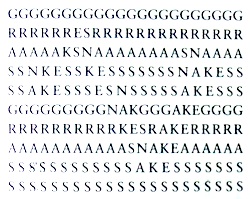 This is where people sit bolt upright in their chairs and say, “But… but… this isn’t haiku!’ It appears between two other poems which quite clearly do fit comfortably in the continuum, but it sticks out like a mustard-plaster on a coal-scuttle. However, in the couple of seconds your eye first takes in this piece, you see the moment that the poet has captured. You think you see the exclamation ‘Great Snakes!’; you hear the ‘SSSSSSS’ of the snake’s hiss; you experience the aphasic ‘GGGGGGG’ of shock, the ‘RRRRRR’ of anger; you do see the word ‘SNAKE’ in there, and also, if you’re paying attention, the word ‘RAKE’. The poet in his garden is surprised by a snake and lashes out with the first thing that comes to hand. The first and last poet in the collection might have scratched their heads, but I think they’d have got it!

There are more than two hundred and twenty poets represented in this anthology. They are presented in order, that order being by the date of publication of their first identifiable haiku. Given the editors’ aim of showing the development of the form, this was a logical decision. Included are poets I know well – David Cobb*, Alexis Rotella, and Johannes S H Bjerg, for example. Also, if you are attracted by ‘names’, you will find Langston Hughes, e e cummings, Allen Ginsberg, Seamus Heaney, Paul Muldoon, and Billy Collins. I spotted Dag Hammarskjöld in there too, which surprised me – in my ignorance I only knew him as a statesman. In the collection are pieces that both reinforce and challenge our perceptions of what haiku is; in the continuum, bright and jagged shapes sometimes swim to the surface.

Pages 321 to 392 of the book are taken up with a dissertation by Jim Kacian, ‘An Overview of Haiku in English’. I really wish it wasn’t necessary, given my prejudice, but I guess it is. There is not a single volume of collected works or wisdom in the libraries of the world that another editor, myself included, would not have done differently. That goes as much for Haiku in English: The First Hundred Years as much as it does for The Faber Book of Beasts or The Oxford Dictionary of Quotations. We others have to let it go. The book under review here is absolutely essential, whether I’m comfortable with it or not, and my comfort is irrelevant. If you are at all interested in haiku, then it needs to be on your bookshelf and in easy reach.

Let me leave you with one of the most poignant pieces. It’s by Frank K Robinson, and it marks a point where the form is used to draw the mind from a simple natural observation to a dynamic and terrible time in 20c history:

*David Cobb, possibly the most renowned haijin in the UK, was kind enough to contribute to the first ever issue of ‘my’ e-zine the zen space.

5 Comments to “Marking a century of haiku”