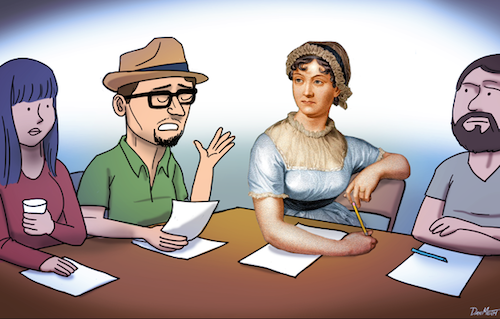 BuzzFeed contributor Shannon Reed came up with this wonderful piece, in which a bloke in a Writers’ Workshop commented on ‘Pride and Prejudice’. Any of you who are writers and are part of such a gathering will recognise his type instantly, sitting there in his hat, glasses, and beard, reading out his epistolarily-framed critique. I gave in to a whim and penned Jane Austen’s reply. So below you will find Shannon Reed’s original, and my rapid response in the persona of Jane Austen. Enjoy!

I don’t usually read chick lit, but I didn’t hate reading this draft of your novel, which you’re calling Pride and Prejudice. I really liked the part where Elizabeth and her aunt and uncle went on a road trip, which reminded me of Chaucer’s Canterbury Tales (also about a road trip — check it out!). Anyway, good job. I do have a couple of notes to share, in the spirit of constructive criticism.

Another problem I noticed: Mr. Wickham (great name, by the way, evoking both a strong but flexible plant, and an earthly, bestial pig) is in the army, but you don’t make use of that. What if Mr. Wickham, instead of just being sort of a scoundrel (Again: why?), is a scoundrel because he’s suffering from his experiences in the war? (Which war, btw?) That way he could tell Elizabeth about it, and we would be able to see that she’s not just an independent young woman, but also a really good listener. He could tell some jokes, too, to liven up the mood, and show that Elizabeth has a good sense of humor. This could be the middle section of the book, like five or six chapters in there.

Also, why five sisters? How about just two? Combine Jane and Kitty. Or, better, make one of the sisters a brother (named “Jim,” maybe?), and then he could be the narrator who mentions his sisters from time to time! Like Hamlet!

While I’m on the sisters, is it just me, or does everyone treat Kitty really badly? Personally, I want to say “Huzzah!” to Kitty, and it’s annoying that everyone else — literally everyone else — wants to hold her back. Even you, I think— and, sorry, don’t mean to hit too close to home here, but… I’m just saying that I would totally court Kitty. She’s got a great sense of humor. But anyway, if you change her to Jim, problem solved!

A few other concerns: Mrs. Bennet is annoying, and you don’t have any people of color. Also, there aren’t a lot of men in this book. Only about the same number as there are women. I was thinking that what you could do is have Mrs. Bennet be dying, but give her a black best friend. Like Othello? (Have you read it? It’s also by Shakespeare, fwiw.) The Othello character could be her butler, maybe? There you go: three problems solved. You’re welcome!

I don’t know if you noticed this, but there’s a lot about hair ribbons here. Did you mean to do that? Maybe you could develop them into a kind of motif throughout, the way Shakespeare uses a skull in Hamlet? Maybe, when Mrs. Bennet is dying, she could ask to hold a hair ribbon? And Othello the butler could bring it to her, and tell her a story, or, better yet, get Wickham in there to tell her about the war. Oh! Perfect: just have Wickham, Jim and Othello talk about the war, while Mrs. Bennet lies unconscious in the background, holding a ribbon.

What do you think about Jim, Othello, and Wickham: Brothers in Arms as a title instead of Pride and Prejudice?

Anyway, while this isn’t something I would pick up on my own to read, I still enjoyed it more than I thought I would. Thanks for letting me take a look, and let me know if you need any more help with it. 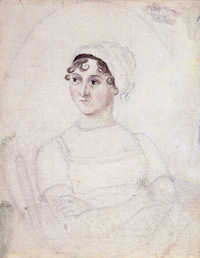 My dear Mr. Timothy, may I begin by saying I am obliged to you, sincerely, for the time and trouble you have taken over your critique. Also, sir, your kind offer of assistance with a re-draft is greatly appreciated, by one so recently arrived from Hampshire and yet to be fully sure of her place in society here (though surrounded by so much simple generosity of spirit). It is a truth universally acknowledged that a single lady in possession of a manuscript must be in want of a good beta reader, so I shall respond extempore to some of your salient points.

Your reputation, amongst our little circle of mutual acquaintances, for admirable frankness, is indisputable. I well recall your helpful comment to Mr. James, regarding one of his short stories – set in Norfolk, I believe. You challenged him thus: “What’s so scary about bedsheets, I mean, really?” Also your words to our Irish friend Mr. Joyce, when you opined that his novel fell “… somewhere between gonzo and mofo, and maybe too much of one and not enough of the other…” and also that you felt that his story arc lacked something by omitting the episode where the hero blinds the one-eyed giant.

By the way, I do notice that neither gentleman is here today, and that our feedback group, though quorate, is a little thin. I declare I have no idea why.

I do take to heart, Mr. Timothy, your suggestion regarding the Bennet siblings. I could, I suppose, recast my novel in a slightly more tragic mould, and have two of the sisters carried off by typhus. However, to my mind that would put at hazard the point of my essai, which is, after all, a douce satire on the station of women on the periphery of genteel English society – rather in the same vein as our colleague Ms. French’s work is of our station in American society. Yes? No? I believe this is something you may have missed, and although I am relieved that you did not hate my novel, I wonder if I could urge you to read it again. Persuasion is my forte, after all. It is not a work solely intended to be read by women, and although, again, I must thank you for the suggestion that I insert ‘Jim’ into the Bennet household, I have to say that such an amendment would mar the isolation of Mr. Bennet – an essential of the plot.

Ah – Shakespeare! Yes, modesty would normally forbid this, Mr. Timothy, but a friend of mine, who must remain nameless, actually likened the quality of my authorship to that of Shakespeare’s. I see the surprise in your expression, and I myself smile at the comparison, but suffice it to say that I am familiar with the writings of the bard. In fact I had already considered a sub-plot in which Mr. Darcy is the Colonel of Mr. Wickham’s regiment, and the latter being enraged by his commanding officer’s advancement of… of… of Mr. Bingley, provokes Mr. Darcy to a murderous jealousy by somehow placing one of Elizabeth Bennet’s hair-ribbons in Mr. Bingley’s possession. Much confusion, eventually resolved of course, but in fact I abandoned this as being a little too contrived. Oh, be assured however, Mr. Timothy, that I fully intend to continue my literary efforts.

Well, would someone ring for tea?