So, what are you doing if you’re not writing?

Apart from feeling guilty, you mean? No, seriously, that is an issue. 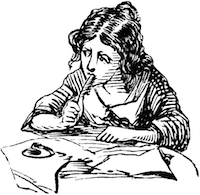 When I think about it, my output over the past few years has been quite something. I have to remind myself that, since about 2005, apart from having finished four novels (three of which have been published and the other is with my publisher awaiting publication), having had at least two-hundred-and-fifty poems published in collections, anthologies, magazines, and e-zines, having written enough short stories to fill over two volumes, I have taken part for five years in a poem-a-day project. So why stop? Why stop that poem-a-day, and why halt progress on my latest novel after 20,000 words? Well, let me be clear about this – I needed a break, and believe me I’m feeling the benefit. Output had taken over from quality, and I was exhausted and frustrated.

So where does the guilt come from? I don’t know. Maybe from the little imp on my shoulder who keeps whispering to me, “You’re an ex-writer, that’s what you are! Now you’ve stopped, you’ll never start again.”

Maybe, in fact, it has to do with the continuing output of fellow-writers I respect. There they go, merrily taking part in NaNoWriMo and suchlike, galloping though the creation of a novel in a single month, filling their blogs with poetry, writing columns of advice for colleague-authors, posting their goals and how they have achieved them… I could go on line now and find, with ease, confident articles on the discipline and routine of writing, and below each I would find an almost endless roll of comments thanking the writer for his or her sage advice. And I would know that, try as I might, I couldn’t stick to anything like such a routine. I might manage it for a week… ten days…

And yet, there’s all my output. I must have had some impetus and discipline somewhere. You would think so. A colleague said my writing was ‘visceral’, meeting that it sprang from emotion, from feelings rather than thoughts. When I consider that such movements in art and writing as modernism, expressionism, and imagism have influenced me, I guess she could be right. Certainly when I set out to write something, with certain exceptions, I do not start out with the goal of reaching a goal. By that I mean that my work is seldom driven by the end, I do not start my novels, for example, with the resolution of the narrative already in my mind*. I describe such a practice a ‘male’ writing, by which I mean it is driven along by the desire to reach a single climax, to use a sexual analogy. It’s the authorial equivalent of ‘getting your end away’. And it is something that is so ingrained in our culture, that it is hard to counter, hard to offer any other way of doing things. As we say in Scotland, ‘it’s aye been’, or at least its ingrainedness gives that impression. Writers like Virginia Woolf showed us that it simply didn’t have to be so, it didn’t have to be the unwritten rule that we all revered like Holy Writ. Yet it lurches along still, like some kind of zombie. There, that’s today’s thought – ‘Zombie male writing’.

To me, there was so much left undone in modernism, as though they picked up the ball, ran with it, passed it to the next author, who just stood there and let it drop. I know, I know, my mixed metaphors are murder today…

Where was I? Oh yes – what have I been doing if not writing. Well, same as ever. Holding down a job, editing, playing my part in family routine, coping with physical and psychological conditions (my own and others’), reading, in fact all the things I was doing while I was writing. Y’know, I wonder where I found the time to write so much! So will I let all these mundane necessities fill the available time, will I become used to them, so used to them that I will one day forget to write, forget that I ever wrote? Well, let’s face it, one day we will all close our eyes on daylight and not simply forget what we were but lose the forgetting too. Life is about letting go. So it is, of course, possible that I will never write again, ever.

Despite the imp on my shoulder, I’m not an ex-writer. Hell, what am I doing right now if not writing? I haven’t stepped away from my work entirely. I jot stuff down, the odd word, the odd phrase, the odd idea. I go through my unpublished corpus to see if there is anything worth submitting to a poetry magazine**. Ideas on how to progress my novel – the one I’m half way through, the one I always wanted to write – keep circulating in my head. And anyway, competing with the guilt-imp is the wee wight on my other shoulder, telling me that if I don’t go back to writing someday soon, I’ll end up in that charming little beauty spot located, I’m told, near Harrisburg PA.

Gonnae no dae that! Gonnae no!

*Many writers claim not to do this, but frankly it’s what most of ‘em do!

**I haven’t submitted anything since about 2013, at which time I devoted all my energy to writing a collection specially for a publisher. The result was my prize-nominated I am not a fish.

2 Comments to “So, what are you doing if you’re not writing?”