And so the Phoenix has risen at last! 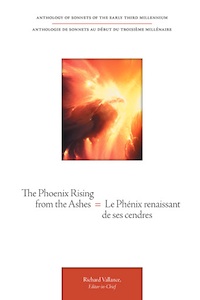 The Phoenix Rising from the Ashes is – if you didn’t know already – an ‘Anthology of Sonnets of the Early Third Millennium’. by that I mean it contains examples of this long-established form of poetry written by contemporary poets. More than two hundred and fifty poets have been included in this book, and it is the first anthology of specifically 21c sonnets to be published. Editor-in-Chief is Richard Vallance, former Editor before his retirement and the magazines’ closure of Sonnetto Poesia and Canadian Zen Haiku. This anthology is his swan song as an editor. I’m proud to have worked alongside him not only as part of the editorial team of SP and CZH, but also as Deputy Editor of The Phoenix Rising from the Ashes.

At present the book is available at Friesen Press in hardback and paperback, and from eBookPie for your electronic reader, but will shortly also be available at Amazon, Barnes & Nobel, etc.

I really can’t recommend it too much. I know the work that went into it, I know the personal exertion that Richard went through to produce it, I know how the editorial team toiled. Most of all I know the quality of the poetry in the book – it is outstanding. There isn’t a poet in there who doesn’t warrant more reading. The sonnet is far from dead, and those people who choose to take the form as a vehicle for their poetic expression don’t do so out of nostalgia, but because it works. This anthology is a work of quality.

3 Comments to “And so the Phoenix has risen at last!”