Millie and Marie meet some Angels 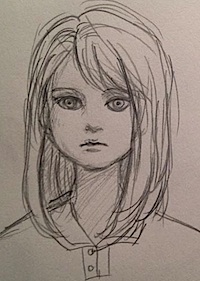 Recently it began to seem like a good idea to find cover art for The Everywhen Angels, my soon-to-be-published novel for older children, in a bit of a hurry. The idea was to publish well in time for Christmas, in order to advertise it for the seasonal market. Well, that might not happen, but in any case the perceived urgency gave me the chance to ask Canadian artist Millie Ho if she could come up with something post-haste. I sent her a copy of the draft manuscript, we discussed an idea I had in mind, and Millie set about constructing it.

Almost every day a sketch would come of one or all of the main characters – Angela, Charlie, and Ashe. 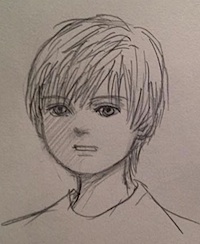 I watched their characters take shape. In the book, we read the same story three times, each version as seen by one of this trio. With each version we get more of the back-story, and maybe more revelations about the underlying mystery. All of it? Hmmm, wait and see. I ask a lot of the young readership; for example, Charlie’s story is told backwards, and one of the first things that happens is that he emphatically contradicts one of the major events of Angela’s story. I touch on ‘difficult’ philosophical matters but, as I learned from my literary hero in the genre of fiction for young readers, Alan Garner, an author should never underestimate the intelligence of his or her readership. 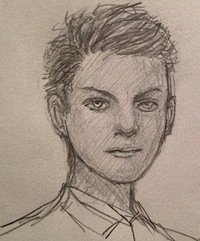 The book came about as a result of a heated but amicable argument between myself and some friends. They are all Harry Potter fans, and I was tearing JKR’s literary style to shreds*. They said I should either write a fantasy set in a school and make it as good as one of hers, or shut up. So I wrote one! It doesn’t quite qualify as a ‘fantasy’, but it does feature a group of teenagers with weird powers. An early draft was tried out on the twelve-going-thirteen-year-old daughter of one of these friends. It was read to her one chapter at a time, at bed time, in return for tidying her room and doing her homework. Never had her room been so tidy, and never had her homework been so promptly completed! I think I more than won the challenge. So does my publisher, P’kaboo, who has been enthusiastic about securing and publishing the book. I did try it with Head of Zeus first of all, who asked to see the full manuscript and were impressed by it, but decided it didn’t fit with the portfolio they were building up. P’kaboo then practically tore my hand off to get it. 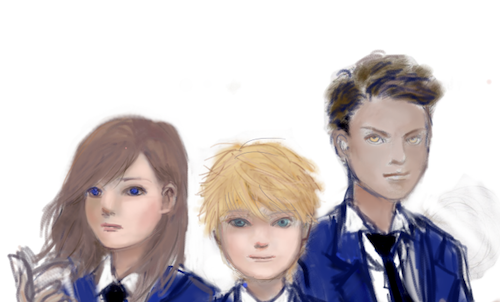 My publisher  was as enthusiastic as I was about Millie’s finished illustration. Millie and I are now talking about further collaboration. There is a possibility of some high-action teen-vampire fiction of mine being turned into graphic novels by Millie’s ink and brush. Millie has already added the word ‘fangirling’ to my vocabulary – it’s what we do with regard to each other’s work. Seems like a good basis on which to continue. I’ll keep you informed.

* Fair’s fair – at the end of the day, JKR can ignore my opinion all the way to the bank, and good luck to her!

4 Comments to “Millie and Marie meet some Angels”